Virtual and mixed reality have experienced a recent surge in popularity, with companies like Facebook investing into the technology. What are some of the new features we can expect to see in these emerging platforms?

“Project cambria” is a new mixed reality tool that has many new features. It allows users to create, share, and explore virtual worlds in real-time. 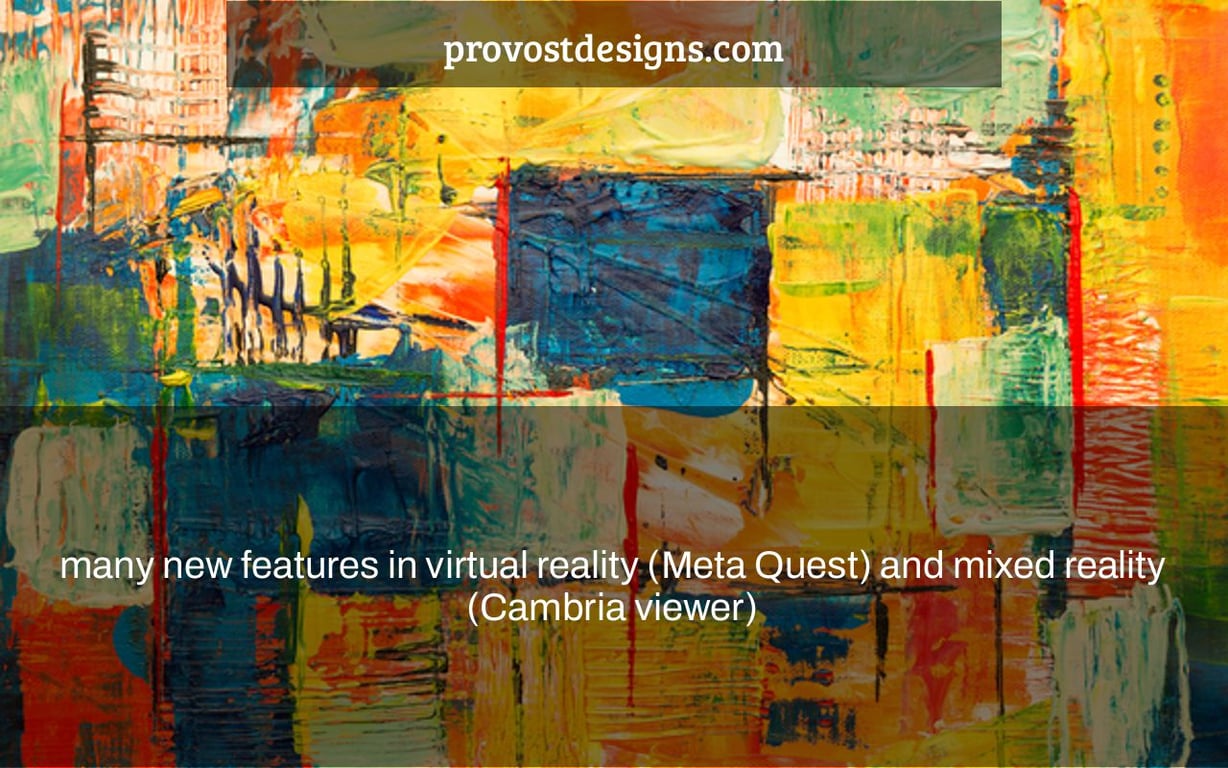 In addition to speculations that let us to see the first actual depiction of the Cambria viewer, Meta projects for simulated realities have also appeared in numerous announcements surrounding the Meta Quest platform in the last few hours.

Building on the success achieved two years ago with The Walking Dead: Saints & Sinners, the survivor horror-style saga set by Robert Kirkman in New Orleans, its sequel, Chapter 2, arrives (later this year, thanks to Skydance Interactive). : Retribution, which will allow its development to continue, making decisions, between fewer resources and more enemies, to face the new threat that looms over the city.

The first official licensed game of the American football championship, NFL Pro Era, is now available on the Meta Quest platform (thanks to StatusPRO). Users will be able to design and lead their team to the ultimate win at the Super Bowl using data from the relevant League, while also competing against friends in the stadium they most like, and improving the talents of the players after training.

Digital Lode and Tripwire Interactive, on the other hand, are bringing Meta Quest 2 the successor to the critically acclaimed espionage game Espire 1: VR Operative. With Espire 2, the player will be able to play in co-op in one campaign or alone in another, with the first person shooter. In this scenario, the player will be tasked with thwarting a new nuclear danger, which will be symbolized by the launch of an impossible-to-track supersonic missile.

The new chapter of the Red Matter saga, with the second episode, arrives from Vertical Robot on Quest 2, in order to take advantage of all of its graphic capabilities: the player will always find himself having to solve puzzles, will have new gadgets available, including a jetpack that will give him more mobility, and he will have to travel the Solar System to stop the spread of Red Matter.

The videogame Moss: Book II, by Polyarc, will also arrive on Quest 2 in summer 2022, continuing the events of the first episode, in which the mouse Quill will have to definitively save the Earth by defeating a winged tyrant who is hunting her, in the same castle where her uncle Argus was imprisoned, then freed. RuinsMagus is a fantasy-based narrative video game set amid the ruins of a subterranean kingdom in which the player must acquire valuable artifacts over the course of twenty missions in order to improve their talents and become a Magus. It will be released later this year on Quest 2.

In the Electronic Mixtape, the popular musical game Beat Saber will receive a new pack of tracks from artists such as Darude, Pendulum, Marshmello, Deadmau5, and Zedd. By the end of the year, Stress Level Zero’s new title, Bonelab, will be available on PC VR and Quest 2. Using the capabilities of VR and with full support for mods, the player will take on the role of a fugitive who has escaped an execution and must run, fight, climb, and unravel the mysteries of an underground laboratory in environments where everything reacts to the user.

Thanks to Armature Studio and Oculus Studios, Capcom’s Resident Evil 4 VR game has received a free update in the form of “The Mercenaries” mode, which, rebuilt in VR, will allow players to compete in about twenty new challenges in order to earn bonuses that can be used in the main campaign, such as Golden Guns, weapon skins, and the Classic Horror Mode (to play in black and white) and Big Head.

Innersloth has stated that Among Us, Among Us VR will be released before the end of the year, thanks to the Schell Games team, who will also partner with Meta on three additional projects. Cities: VR is the virtual reality version of Cities: Skylines, a city builder by Fast Travel Games that requires the player to develop and govern their dream city in virtual reality. It will be available on April 28th. Ghostbusters VR, a title edited by nDrems that is based in the franchise of the well-known story of the Ghostbusters, will be a cooperative game in which you will play with three other people to catch new ghosts, will take a long time, with an estimated release date of the end of the year. The proton backpacks are to thank for this.

Crystal Atrium, a new environment for the virtual space accessed with the viewer, was made available in the main menu of Quest 2 through the Personalization section, on the occasion of the Gaming Showcase 2022 event. It is characterized by a balcony with various pools filled with mystical purple crystals.

The second piece of news from Menlo Park is similarly about virtual worlds. The Cambria project was created (o Seacliff), lighter and slimmer than the usual Oculus viewers, with one camera per side, multi-lens lenses, two 2.48-inch miniLEDs for a resolution of 2,160 x 2,160 pixels, and an elaborate tracking system, by combining the confidences of some users who have been able to use it, and of the supply chain, the first render of the future challenger of Microsoft Hololens, or rather of Meta’s viewer for mixed (head, eyes, and maybe even moods and emotions).

The “meta cambria resolution” is a new feature in the Meta Quest and Cambria viewer that allows users to change the resolution of their virtual reality or mixed reality experience.

Have Yourself A Cleaner And Fresher Hari Raya With Dyson

How to Update Archos ALBA 8 to Android 7.0 Nougat Stock Firmware